Difference between revisions of "Subway" 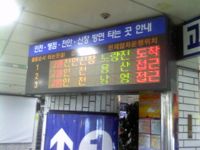 Sign at 신도림 station showing the status of other trains.

There is usually a sign in the subway station indicating the status of a train. The status is related to subway station next to it, for example if it says "용산 출발" then it means the train is departing from 용산 station.

For lines 1-9 use the Sino Korean numbers.

Note due to consonant assimilation rules, some of the line names are pronounced differently than spelled. Proper pronunciation:

Messages and announcements heard in the subway station and subway.